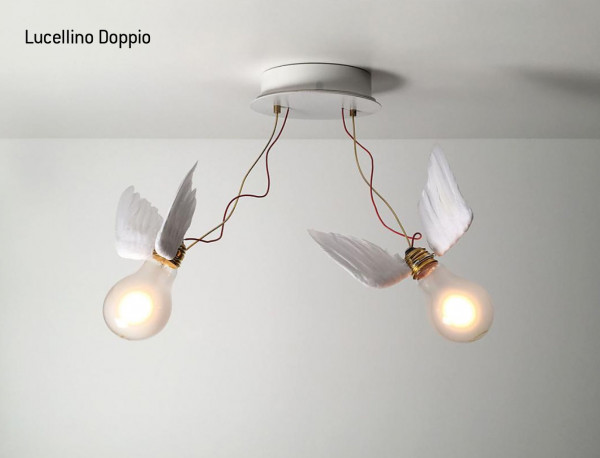 Please let us create an individual offer for this article in the next step! First, put in the shopping cart and then click on the button "Request offer".
Description Useful information Downloads Accessories / spare parts Downloads
Description
Lucellino Doppio LED by Ingo Maurer Like two little birds, the two light bulbs of the... more
Close menu

Like two little birds, the two light bulbs of the Lucellino Doppio LED ceiling and wall lamp by Ingo Maurer sit on their base. This fascinating designer lamp presents itself as a mixture of simple light bulb and feather-light winged creature. Both are also combined in its name: Lucellino is composed of "luce", Italian for light, and "uccellino", Italian for little bird. As early as 1992, Ingo Maurer created the predecessor of this wall lighting, a wing lamp with only one light bulb. The Lucellino is still one of the most charming and popular creations of the designer. Since 2018, it is available in a charming duo - as Lucellino Doppio LED or with halogen bulbs, which can be used as a wall or ceiling lamp.

Already in 1992, Ingo Maurer created the predecessor of this wall lighting, a wing lamp with only one bulb. The Lucellino is still one of the most charming and popular creations of the designer. Since 2018, it is available in a charming duo - as Lucellino Doppio LED or with halogen bulbs, which can be used as a wall or ceiling lamp. Wing lamp with real feathers. The highlight of this original designer lamp are undoubtedly the delicate little wings, which are made and attached in elaborate handwork. They are made of real white goose feathers. Only the wings give the Lucellino Doppio its special lightness and positive aura. The wings - attached to two lamp arms - can be bent in all directions thanks to the typical red Ingo Maurer wires. This allows for an individual design.

The high-quality LED illuminants are manufactured exclusively for Ingo Maurer. With their gentle luminous flux of 200 lumens, the LED bulbs bathe any room in a fabulous, warm mood light. A metal plate serves as a touch sensor for switching on and off. Wall lighting that inspires. The Lucellino Doppio LED can be mounted either on the ceiling or on a wall according to individual preference. For example, this designer lamp can be used to create a decorative accent above the bed in the bedroom, in the hallway or in the living room above the couch. Also in a salon, hotel or store, this high-quality wall and ceiling lamp charms every visitor. It provides an eye-catcher everywhere and invites the viewer to linger: the dimmable Lucellino Doppio LED with wings made of real feathers (dimmer not included). Due to its special design, the Lucellino Doppio LED is not suitable for rooms with high humidity.